The movement to #AbolishICE is entering the mainstream conversation. After months of organizing by groups like Mijente, United We Dream, Indivisible and DSA, Democratic Rep. Mark Pocan announced this week that he plans to bring the #AbolishICE movement to the House floor.

“I’m introducing legislation that would abolish ICE and crack down on the agency’s blanket directive to target and round up individuals and families,” Pocan said in a statement on his decision. 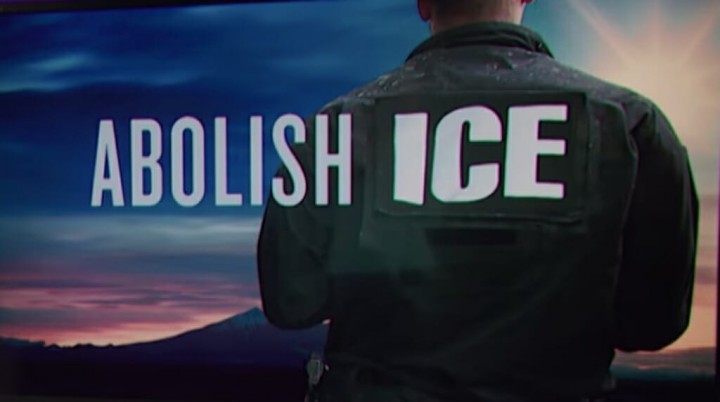 “It [is] clear that ICE, and its actions of hunting down and tearing apart families, has wreaked havoc on far too many people,” Pocan continued. “From conducting raids at garden centers and meatpacking plants, to breaking up families at churches and schools, ICE is tearing apart families and ripping at the moral fabric of our nation.”

Within a matter of months, collective action has turned a hashtag into legislation. #AbolishICE is also becoming a litmus test for those seeking office on the left. Cynthia Nixon, who is currently running for Governor of New York, has called for ICE to be abolished, joining calls from Reps Earl Blumenauer (D-OR), Pramila Jayapal, (D-WA) and Jim McGovern (D-MA) and a growing number of congressional candidates.

One of those candidates, Alexandria Ocasio-Cortez, just won the primary for New York’s 14th Congressional District, unseating Joseph Crowley, a powerful establishment Democrat who was reportedly being considered for speaker of the House.

Deb Haaland is favored to win in New Mexico with a platform that includes abolishing ICE. As a Native American woman, Haaland has a unique perspective.

“There have been people immigrating to our country for hundreds of years,” Haaland told Yahoo News. “ICE is only 15 years old. What did they do before that? What did they do 15 years ago? I realize it was implemented after 9/11, but they’re not going after terrorists right now, they’re going after moms and dads.”

Matt Haggman, running in a competitive race for Florida’s 27th district in Miami, has called ICE a “15-year experiment that has failed.”

But why do incumbents, candidates, and groups like Indivisible want to abolish ICE?

To understand that, you need to understand the origins of the agency. ICE, which stands for US Immigration and Customs Enforcement, is an agency within the Department of Homeland Security that was created in response to 9/11 to “target criminal aliens and those who pose a threat to our nation” (as stated on its website).

Threats to our nation apparently include pizza delivery men like Pablo Villavicencio, who was detained while delivering a pizza in New York. Villavicencio is a father of two—with no criminal record—who is married to a U.S. citizen. Villavicencio had filed for his green card in February and was still waiting for a response when ICE detained him for inadequate documentation on June 7. Villavicencio is still being detained in an ICE detention facility.

ICE is often compared to the gestapo of Nazi Germany due to its practice of targeting immigrants living peacefully in the United States. This practice goes beyond the claim of “improving border security” found on its website, as many of those detained and deported have lived in the United States for a number of years or even decades. Some, like Miguel Perez Jr., are U.S. military veterans. Also like Perez, many are being deported based on crimes for which they already served jail time (which Perez argues is tantamount to double jeopardy).

Immigrants like Villavicencio who were once considered a “low priority” by the agency (i.e., not a threat) are now low-hanging fruit. Though deportations were once relatively rare in America, ICE now makes more arrests per year than the FBI, U.S. Marshals, and the Secret Service combined.

ICE has been emboldened by the blood libel and “bad hombre” rhetoric of our president, who routinely and falsely conflates illegal immigration with the street gang MS13. ICE’s website also makes the false claim that “most of today’s crime is transnational in nature” though studies have indicated that there has not been an increase in crime that can be attributed to the increase in immigration. In cities that have seen an influx of immigrants, crime has actually been drastically reduced.

Houston Police Chief Art Acevedo, who has spent much of his career interacting with the city’s undocumented population, has been outspoken in his criticism of a U.S. immigration policy justified by portrayals of immigrants as criminal boogeymen.

“There’s no wave of crime being committed by the immigrant community,” Acevedo told NPR. “As a matter of fact, a lot of the violent crime that we’re dealing with is being committed by people that are born and raised right here in the United States.”

Yet, according to a Gallup poll, almost half of Americans believe that immigrants increase crime. In addition to shaping public opinion, the president’s harmful rhetoric emboldens ICE to ignore due process and human rights as it targets, detains, and deports those who wish to live peacefully in our communities. Immigrants like Villavicencio may not be criminals, but thanks to the president’s rhetoric, they might as well be.

Human rights violations and abuse, which have marked the sordid history of the agency, have been ramped up in the past few months since the administration’s “zero tolerance” policy went into effect in April. This drastic overhaul has prompted the courts to forego fair trials in favor of mass trials that process dozens of people at the same time.

After visiting the border, Elizabeth Warren reported this week on the putrid smell and harrowing sight of cramped cages that were too full for everyone to have enough room to lay down on the cement floor to sleep.

For-profit prisons are seeing a huge boom in business thanks to the “zero tolerance” policy. ICE spends $2 billion a year on detention facilities contracted to private prison companies like GEO Group and CoreCivic, each of whom donated $250,000 to Trump’s inaugural celebration. In a major local victory, Williamson County voted Tuesday to end their contract with a facility operated by CoreCivic.

Unfortunately, thanks to Texas law SB4 and Section 287(g) of the Immigration and Nationality Act, local authorities are forced to cooperate with—and even do the work of—federal immigration officers (or face the consequences). SB4, signed into law by Governor Greg Abbott, encourages officers to engage in “show me your papers” racial profiling. It also penalizes higher-ups who attempt to prevent staff from asking about a person’s immigration status.

How would the United States function without ICE?

Rather than terrorizing families in our communities, there are other tactics for enforcing immigration law within our borders, such as tracking work visas. If ICE were abolished, customs duties could be resumed by other agencies. The Family Case Management Program, launched by DHS in 2015 and dismantled in 2017, could be reinstated to offer a humane alternative to detention, allowing families seeking asylum to be released and monitored by social workers. The Immigration and Naturalization Service (INS), which was dismantled in favor of ICE, could be reestablished. Justice issues would return to—you guessed it—the Department of Justice. We could also save taxpayers the $7.6 billion they are currently spending on ICE and its bloated budget.

For starters, Houston could stop diverting tax funds toward family detention centers. Southwest Key operates five detention centers for children within the Houston city limits and has plans for another. Despite Mayor Sylvester Turner’s vocal opposition, the city of Houston plans on moving forward with the facility located, ironically, on Emancipation Avenue, a stone’s throw from Dynamo Stadium and “The Juice Box” AKA Minute Maid Park, home of the world champion Houston Astros.

If ICE were abolished, Houston’s 600,000 undocumented immigrants could come out of the darkness and into the light. They could continue to provide for their families and contribute to society as they already have. The only difference is that they could begin to achieve the levels of representation they deserve in a country founded on “no taxation without representation.”

As long as human rights violations are committed by ICE, this fight isn’t over. Indivisible Houston will continue to demand that Congress #AbolishICE to keep moving the conversation forward even after it goes to the House floor.

Call and tweet at your member of Congress vocalizing your support for the #AbolishICE movement.

Local office numbers and Twitter handles of all Houston area reps can be found below.