Texas education advocates have been heartened by the rhetoric surrounding education packages for the current Texas legislative session. While the renewed talk around education is positive, however, we must all temper that excitement and proceed with caution in our analysis of Dennis Bonnen’s education proposals. 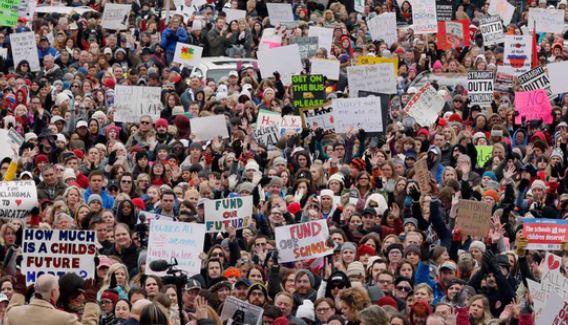 Education has been a popular topic in Texas, and it’s understandable why. Our education system in Texas has not served kids well, largely thanks to underfunding, privatization, corruption, and failure to address poverty.

The shortcomings of Texas politicians and bureaucrats came to somewhat of a head this past election cycle, as thousands of teachers in Texas block-voted for what they declared to be “pro public education candidates”, with Dan Patrick as their key target. The uprising of teachers against Patrick gained just enough traction to get his attention, particularly thanks to a strong performance at the ballot box by Mike Collier and other pro-ed candidates. Conservative lawmakers lost seats as the balance of power shifted against incumbents and toward several progressive newcomers to the Legislature.

As a result, the common rhetoric coming from the new speaker, Dennis Bonnen, has largely revolved around education as a priority. Bonnen’s political capital is teeming over the brim. He was made Speaker with unanimous approval from the House and secured strong support from across the aisle early on, including a glowing editorial from one Houston lawmaker. So far, much of the media coverage of Bonnen has positioned him as intensely focused on education, reinforcing the narrative of reform that is bipartisan and inherently beneficial to The People.

This general narrative matches the culture of the Capitol; if the art of compromise at all costs is the popular culture of American government, then the Texas Legislature is an emblem to American government. No matter what kind of obstruction we see in Washington- whether it’s from the White House, the Senate, or the abundance of bureaucrats hostile to their own departments- Texas legislators trade horses (and probably plenty of whiskey, too).

Sounds good, right? Seems better to have elected who are willing to trade than not. After all, government is meant to be a place where policies pass and people get what they need from programs and adjustments to the law. Compromise makes it happen, right?

Last session, in 2017, Texas passed SB4, the most draconian immigration bill since Arizona’s own Show Me Your Papers Law. Legislators also teetered on passage of a bathroom bill, saved only by Joe Straus’ decision not to bring the bill to the floor. On education, the Legislature failed to find room for real reform.

Since then, education talking points from the office of Greg Abbott and Paul Bettencourt have been heavy on hostility and privatization proposals. Thanks to the bipartisan education measures known as HB 1842/SB1882, passed in the 84th Texas Legislature, black and brown schools in HISD and other districts around the state are in danger of partnerships, charterization, or hostile takeover by the Texas Education Agency (see a full summary of where the bill puts us here). TEA consistently spouts business language in its education talking points and has pushed a pro-charter agenda that perpetuates the narrative of public education failing simply because it is public. TEA’s entire model for governance revolves around high stakes testing and privatization, which in combination with the impacts of 1842 are dangerous for the future of students across the state.

Meanwhile Bettencourt- who attempted to close the Harris County Department of Education last session and even filed two bills to do so- is again angling to close that department. He has coordinated with Orlando Sanchez to push a radicalized message of hostile state takeover and elimination of local control.

Membership on the education committees for the House and Senate is no more promising. In addition to Bettencourt, the Senate Committee on education includes Senator Larry Taylor, who sponsored 1842. The House Committee on Public Education includes 1842 co-author Harold Dutton. Dutton a favorite of the Texas Charter Schools Association, especially for his proposal to leverage public facilities for use by charters.

In other words, the overall education position of the Texas Legislature leans hard to the right, which brings us back to why we should be wary of education proposals coming from Texas leadership. Between Dan Patrick’s previous failures to fund public ed thanks to his intense focus on manufactured crises driven by prejudice (such as the “bathroom bill”), Abbott’s dedication to TEA takeover, and the general right-leaning nature of the legislature, it is more likely than not that any education package passed to increase funding will include questionable education proposals, too. There is even discussion of potential reinforcement of high stakes testing policies built in to education packages that have been of significant concern to public ed advocates.

Meanwhile, internal signs of tension on the issue are already beginning to show. The Texas Standard reports that one State Senator, Kel Seliger, was likely demoted from the Higher Education Committee to Agriculture based on a difference of political position with Patrick on education funding issues. Meanwhile, two drastically difference education reform packages that are fairly far apart have been proposed, but tension from legislators demanding adjustment to property tax laws to accompany any changes in education funding jeopardize a future deal. An across-the-board raise has been proposed for teachers, but Texans will have to see what accompanies that proposal; the current package excludes several important funding components for special needs students.

As for Bonnen’s history on education and whether his rhetoric will match what hits the table when a bill passes, his history is worrisome and includes some past support for deregulation that opens the door to charter expansion, and opposition to decreasing class size. Bonnen tends to vote against vouchers, but vouchers have largely dipped in popularity and have been replaced by charters for the most part as a tool in the ongoing erosion of public schools and their support systems.

In particular, watch out for proposals that may…

· Cut positions to make up for raises

· Fund inequitably based on shaky or manipulated data

· Tether raises or bonuses to performance

· Talk about kids like they’re a product (“return on investment”, etc.)

· Or otherwise fundamentally challenge or change the meaning of public schooling.

When in doubt, follow the money and see what charter proponents in Texas are pushing for. If they are for it, public school advocates should likely oppose it.

There are some reasons to be positive about the potential for education reform. In addition to raises looking like a real possibility, a bill that greatly limits the gravity of the STAAR test has gotten serious attention, firing an early warning shot against high stakes testing.

Yet between the Texas Education Agency, the heavy influence of the charter lobby on both parties in Texas, and the track record of the key figures in this session’s education fight, Texans who favor strong public schools and a better future for our kids should proceed with caution.