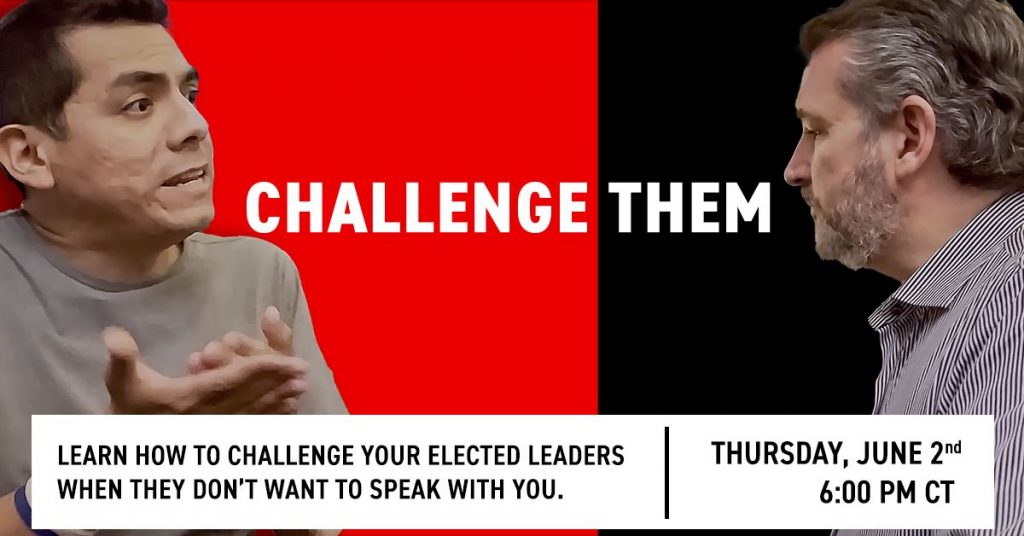 Join us for a livestream panel on making your politicians answer tough questions on the spot.
The time for civility with extremist politicians is over. If they won’t talk to us, and they won’t change, We The People must challenge them.
In a now viral video, we saw Texas resident Benjamin Hernandez challenge Ted Cruz to support background checks and other measures at a restaurant in Houston, TX. His willingness to directly challenge and confront those in power have inspired many people who are now asking how they can do the same with their elected officials who have closed off access to themselves.
Hear Benjamin talk about his encounter with Ted Cruz and our expert panel breaks down how to ask politicians the tough questions, and make them answer for them—or wear them in shame. At the end of this livestream, you'll know how to find these politicians, ask the hard questions, get it on film, and show the world.
BONUS: Unlike Ted Cruz, we'll be answering your questions.
Join us on FB Live, Thursday June 2nd at 6:00pm Central, at https://fb.me/e/5Jerqu2EM
Previously: Jan 31, 2021 - General Meeting - Redistricting Strategy for the Texas Lege! Collapse

With redistricting coming in the next legislative session, Texans will soon face a statewide discussion over what maps should look like to make sure elections are fair and people are represented. What should those maps look like? What should we be cautious of as legislators, donors, and special interests seek to influence the map for future elections? How can we as Texans fight for fair, democratic maps against the tide of anti-democratic voter suppression, intimidation, gerrymandering and other extremist schemes?
Join Indivisible Houston and Fair Maps Texas for our (virtual) January general meeting to learn more about the answers to these questions. This presentation will help prep working Texans seeking to push for representation of their communities to deliver testimony for the legislative session. We will also plug you in to the statewide Indivisible efforts to impact the upcoming legislative session.
Let's start 2021 off right, in the name of democracy!
See y’all there!
Login details at event posted on Facebook.
Previously: 2020 Contactless Canvassing for Candidates Expand 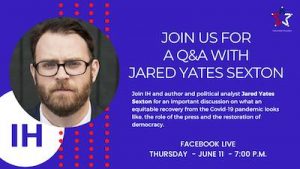 IH is pleased to have our friend, author, political analyst, and host of The Muckrake podcast Jared Yates Sexton join us to discuss what an equitable recovery from the Covid-19 pandemic looks like, the role of the press and the restoration of democracy.

Jared is well-known and well-regarded for his daily in-depth analysis of the authoritarian nature of the Trump Regime and how we can defend our rights. His most recent book American Rule: How A Nation Conquered The World But Failed Its People comes out later this year. Currently, he is also an associate professor of writing at Georgia Southern University.

The night before the House of Representatives takes a somber vote to impeach Trump, we'll head to every congressional office and public square to declare that Nobody Is Above the Law as representatives finalize their positions and senators look on. Thousands of people will take to the streets in every state of the union, at over 600 planned events. The events in support of impeachment and removal from office will take place on Tuesday, December 17, at 5:30 p.m.

In Houston, we will gather at 1919 Smith Street, outside the Mickey Leland Federal Building where Ted Cruz has his office. This event will be peaceful, law-abiding, and family friendly. Not in Houston? Check out events being held in Conroe and Galveston.

Parking: Central Parking is directly across Smith Street from the Federal Building. The St. Joseph lot is close by, at the corner of Milam and St. Joseph Parkway.

Metro: The Federal Building is just a short walk from Metro’s Downtown Transit Center, where the light rail and a number of bus lines stop.

Lights: It will be dark! Plan to bring a flashlight or use your phone as a light. Some people are downloading a candlelight app for their phones.

Posters: Many people will bring posters, banners, and American flags. Messages include “We the People” & “Trump is not above the law” & “Impeach and Remove” & “Defend Democracy”.

We are grateful to the team that's organized this event for the people of Houston. ♥

This is our time to stand up for our democracy. See you there.

2019 is almost at an end, and you've done such great work to make the world better this year! You've protested, testified at public hearings, registered people to vote, knocked doors, strategized, and done your part to make our city better.

Come kick back with us for a happy hour style evening the night of election runoff returns! Party starts when the polls close.

Can't wait to see you! 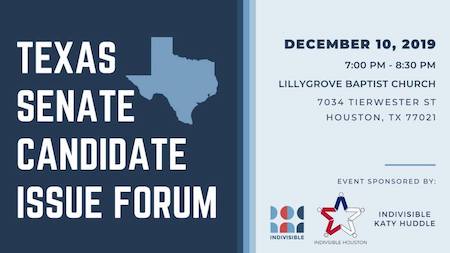 What: Join Statewide Indivisibles and Indivisible Houston right here in our hometown for a Senate Candidate Forum featuring Democratic primary candidates for Senate, moderated by Patrick Svitek of the @texastribune.

We are proud to hold this event so Houstonians can get a closer look at the candidates and hear their positions.

Come connect with Houston Indivisibles and get informed! 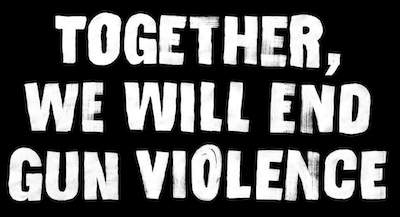 As America grapples with widespread gun violence, organizers of all walks of life are working to fight the epidemic impacting communities across the United States.

However, we must also ask ourselves important yet difficult decisions about the gun violence prevention movement. Are we intersectional in our approach or only elevating an isolated perspective on the gun violence narrative? Are we working together to ensure communities of color impacted by gun violence have real representation? Have we put gun violence survivors and victims first?

Indivisible Houston is proud to welcome Community Justice Action Fund for our next general meeting, a special workshop for organizers, advocates, and activists seeking justice in the gun violence prevention movement. We welcome Erica Ford, a peacemaker and heart leader who brought therapeutic services and a steep decrease in gun violence to her own neighborhood in Jamaica, Queens through a new, transformative way of addressing the issue.

If fighting gun violence and making sure the coalition against gun violence is truly inclusive to address the entirety of the issue, this meeting will serve as a starting point for making that a reality.

We are honored to be able to host it, and invite you with open arms to attend. Snacks and Beverages will be provided. All are welcome.

What: Hosted by Young Democrats of Brazoria County 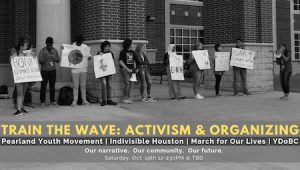 Our neighbors Daniel J. Cohen from Indivisible Houston Katherine Ospina from March For Our Lives Houston are coming to Brazoria county to amplify our voices in activism and organizing.

This event is open to all organizations interested in the progressive movement. The Pearland Youth Movement and Young Democrats of Brazoria County invite you to help push our narrative, our community, and our future.

NOTE: This event is open to all ages. Brazoria County has 5 generations of organizers with experience level from newbie to expert. As we learn to navigate through intergenerational organizing, please keep in mind that the youth have a seat at the head of the table and allow their voices to be heard. 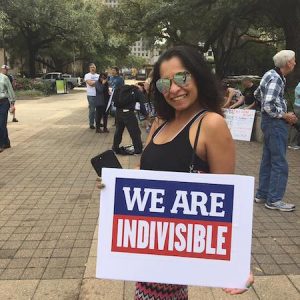 What: With 2020 14 months away, key issues have become a centerpiece of the debate over the presidency, with none larger than healthcare. Yet healthcare plans that are similar between candidates may take nuanced positions to establish slight differences, or may be built on entirely different philosophies.

Join Indivisible Houston at our next general meeting Tuesday, September 24th, 6:00-8:00 PM at Trini Mendenhall Community Center located at 1414 Wirt Road to learn about the specific differences in healthcare plans from 2020 candidates with healthcare expert Ken Janda, who has successfully worked on both the private and public sides of healthcare and has successfully facilitated changes in policy with Harris County Public Health.

We will also hear from members of DSA’s grass roots Medicare for All team on what Houstonians are saying about Medicare for All, as well as Medicare for All Advocate Ira Dember. Ira is a proud Indivisible with keen insight into the healthcare system who makes a passionate case for why Medicare for All is the right answer to our health crisis. Ira has been in the streets almost every single week of the Trump Regime as part of the ongoing, relentless weekly John Cornyn protest 11:45-1:00 at 5300 Memorial Drive.

Finally, we'll hear some from experts who are working on the Stop I-45 Campaign, including upcoming meetings and public hearings and the impact the project will have on the Houston community.