Tonight from 7:00pm to 8:00pm (Thursday, March 19), Gov. Greg Abbott will be holding a virtual town hall to address his administration’s response to the national spread of COVID-19. The event will be carried live on KIAH-TV in the Houston area, the CW network (www.cw39.com).

According to the producing station KXAN in Austin, “The broadcast will allow approximately 45 minutes of questions submitted by viewers around the state.” The moderator will give preference to questions that are submitted as videos.

Pick up your phone and record your questions on Facebook or Twitter with the hashtag #AskAbbott for them to pick up your video. Tag us at @indivisiblehou so we can amplify you.

Abbott and his team were largely absent early on in the spread of COVID-19 and late on the draw in almost every decision they have made since this started. We have questions, and we deserve answers.

Here are five questions to #AskAbbott.

Since local approaches have been insufficient, what will it take for you to act decisively for public health statewide? Local officials across Texas have already demonstrated they may not be able to respond sufficiently to this pandemic. South Padre Island has been full of partygoers all month, despite positive COVID-19 tests from visitors to Cameron County and too-little-too-late restrictions from local authorities. Pleasure Pier and other festivities on Galveston Island were fully operational through the weekend, and local authorities closed them only on Tuesday.

This variation in local response will cause fatalities among Texans. We need strong and immediate coordination of a statewide effort to marshal all available healthcare resources, from hospital beds and intensive care units to ventilators and PPE for providers. Thanks to ProPublica, we know that even in a moderate COVID-19 scenario, hospitals in Houston will require 2.8 times the beds currently available in the next twelve months (or about 14,300 beds to support need when 40% of the area’s population is infected over a year). How many beds do our Texas hospitals have? How many are already occupied? Where is your plan to expand ICU and hospital bed capacity immediately? 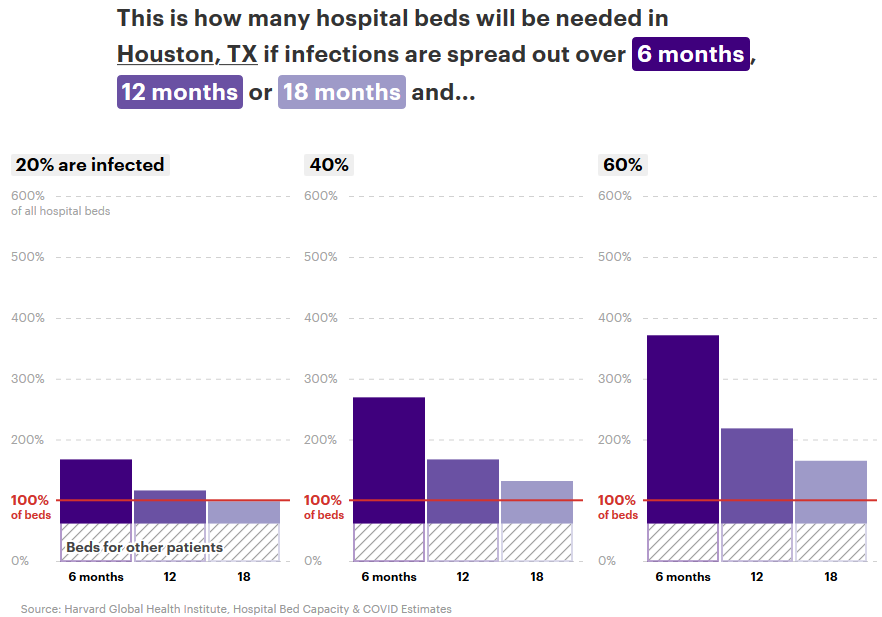 Even in a moderate scenario, hospitals in Houston will require 2.8 times the beds currently available.

Will you commit to implementing universal vote by mail (VBM), for May runoffs and for November? Texas already allows vote by mail under very limited circumstances. Expanding VBM for any voter, for any reason is the only way to guarantee the health and safety of voters, poll workers, election staff, and elected officials.

And while we’re on the subject of voting? Even Kansas allows online voter registration.

Will you commit to suspending the collection of medical and student debt referred to the state attorney general's office? As you know, Texas is home to over 100 public institutions of higher education and hundreds of public hospitals. While your office cannot halt all debt collection, you have it in your power to suspend collection of debt that has been referred for delinquency from state institutions like colleges and hospitals. Texans need to focus on staying safe and healthy, and even a 90-day suspension would make a big difference for thousands of families.

4. Stop All Evictions and Utility Shutoffs.

How will you protect Texans from eviction and utility shutoffs in the event of loss of work during this shutdown? Many Texans live paycheck to paycheck, and therefore have little in terms of "rainy day" savings. HUD has announced a cessation of evictions from their properties through at least the end of April, as has Harris County. Surely families in every Texas county deserve the same flexibility, especially while federal relief (cash assistance) has not yet arrived.

Will you expand Medicaid in Texas to meet the needs of this moment, like you did after Harvey? During a national emergency, states can request additional flexibility from the federal government to connect people to coverage and care. For example, approximately 350,000 New Yorkers were covered by Disaster Relief Medicaid in a four-month time period following the September 11th attacks in 2001. Your own administration expanded Medicaid eligibility to families in Harvey-affected communities across Texas in 2017.

Will this affect STAAR and TEA Accountability in 2021 as well? This is a stressful time for students and families. Many school districts are providing academic support for students during an unprecedented shift in instructional delivery. Your own home district of Dallas ISD has even cancelled school for the “indefinite” future. This will impact their learning for years to come. Can you clarify whether students will be penalized for struggling with these sudden changes in instruction and family priorities?