While the Trump Administration has made border-crossing from Mexico much more dangerous, Central American refugees continue to seek asylum in the United States, in significantly higher numbers than previous years. In response, various states and municipalities have voiced and voted for their desire to maintain “sanctuary cities” to provide much needed humanitarian and legal assistance, as well as protect refugees from deportation back to dangerous regions. This example of American compassion at the local and state levels has been notably resisted by the Trump Regime.

Trump and Company’s cruelty have been enabled by his accomplices in Congress, including Texas Senator John Cornyn. Cornyn has long straddled an impossibly high fence on the immigration issue. In advance of his recent visit to the border with Vice President Pence, Senator Cornyn made several press releases emphasizing the tired lie regarding the proposed HUMANE Act, saying it would be a solution to the humanitarian crisis this administration has created in spite of the fact that it would, in reality, worsen the problem. 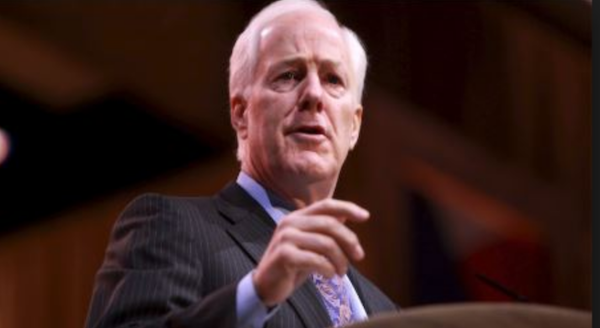 Immigration will be a key point of contention for Cornyn’s upcoming reelection campaign. Texans can expect to see a continuation of his current rhetoric and policies: Cornyn will incite the fears and prejudices of voters to allow for further militarization of the borderlands.

In addition to being bad policy, this position is hypocritical. Cornyn’s last campaign in 2014 claimed dedication to the principle of “limited government”, as the greater GOP platform has shifted toward increasingly centralized police power Cornyn is now also dropping that line from his talking points. In fact, many of his Republican opponents in 2014 were already concerned over his evident “complacency in supporting an all-too-powerful federal government” (So much, it seems, that the Fort Worth Star Telegram insisted on defending him against that accusation). Since his last re-election, Cornyn has dropped the pretense of supporting Texas values, rather instead he bolsters the GOP’s increased nationalism without regard to his base’s sense of self-determination, acting as if his base won’t notice—or care.

Cornyn’s pursuit of nationalism is evident in his voting record, sponsoring one bill and voting to advance a second for measures designed to punish municipalities who assert themselves as a sanctuary city for immigrants. If these measures were to pass, the federal government could withhold federal funding for local law enforcement measures in cities that refuse to comply with ICE detainer requests. When a city or state decides for itself that it does not support authoritarian overreach by the federal government and will not be bullied into cooperating with mass incarceration and family separation, that decision exemplifies self-determination, a value Cornyn previously claimed to support. Yet it is Cornyn among those who seek to undermine local jurisdictions operating within the bounds of the U.S. Constitution.

So why the policy shift? Part of the change may have to do with the larger political shift by the Trump White House from potentially reasonable discussions surrounding immigration to irrational fear-mongering and racist nationalism. We can also see some of Cornyn’s motive to dispense of “small government” as a virtue by following the money; as one of the top recipients of private prison donations, Cornyn has a clear motive to support corporate entities that wish to profit on the backs of immigrants and people of color who have been treated inequitably by a systemically broken criminal justice system. The more those companies profit, the more campaign cash ends up in Cornyn’s coffers, and the more he votes to line their pockets, perpetuating a cycle of dark money, backdoor deals, and human rights abuse.

If Cornyn truly wanted to fix our immigration system and take on the cartel, he would push back on the Trump Administration. Trump has made matters worse south of the border by forcing Mexico’s counter-cartel resources to be redirected to the border by threatening Mexico with tariffs, thus allowing the cartel to gain ground. In spite of more than a decade in the Senate, Cornyn has failed to move the needle on bipartisan immigration reform, a DREAM Act, or even cursory investigation of widespread abuse at ICE and CBP.

It’s time for Cornyn to go.

Never block walked before? Have no fear! We provide training and pair you up to make sure you are well-prepared and safe.

If you are unable to walk, we have plenty of other ways to contribute… so come on out!