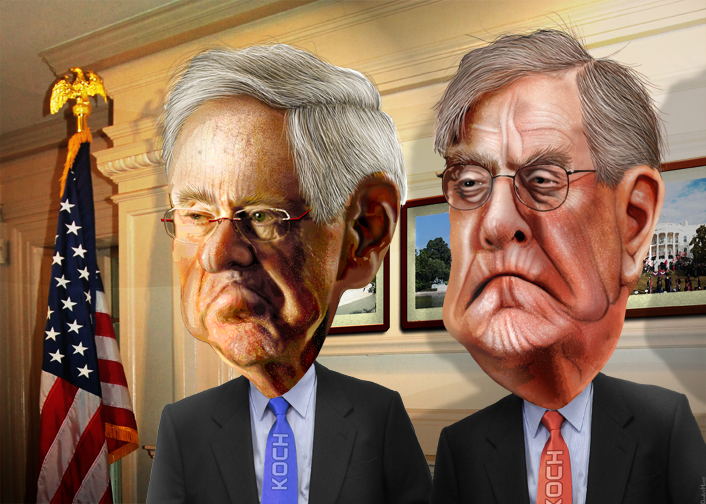 Here’s just a small taste of how the Koch Brothers have funded cutthroat law and economics programs at Texas universities— and what you can do about it.

Yesterday, the world’s obituary sections dropped a bombshell on their respective audiences with the death of one of the Koch Brothers, conservative billionaire David Koch. David and his surviving brother Charles are best known for their role in right-wing social engineering. The Koch Empire influences not only politics but American culture at large by donating large sums to universities so that they can set up bogus think tanks to push their ultra-capitalist and economically imperialistic agenda, thus participating in shaping American thought itself.

Specifically, the Kochs have been a point of interest for their intrusive, shadowy takeover of the US government and were a central focus in the book “Dark Money” by Jane Mayer. Mayer’s book details their strategy of establishing beachheads on college campuses to legitimize ideas that line their pockets, then building “social welfare” groups to carry out policy activism to support those positions. Most recently, the bestselling book “Kochland” showed how this strategy manifested as opposition to climate science and renewable strategies. Not surprisingly, Koch Industries is one of the worst polluters country as the second largest privately-held company in the United States.

These university efforts are neither occasional nor fringe; the Charles Koch Foundation supports more than 300 universities across the country, including plenty in Texas, leaving a trail of disaster and corrupt influence across Texas academia.

One school where the Kochtopus has recently exerted tremendous influence is Texas A&M (TAMU). In 2018, the Charles Koch Foundation was TAMU’s top donor. Over the past few years, the Charles Koch Foundation has given TAMU over $3 million dollars to build something called the Center for Grand Strategy, which was opened in October 2018 to influence foreign policy. This Center is housed within TAMU’s Bush School of Government and Public Service, which instructs our future politicians, bureaucrats, wonks and thought leaders. In a blog entry on the Charles Koch Institute website, Grand Strategy is explained as “a statement of how military means can be used to accomplish national or state goals in its foreign relations.”

The United States has long used military intervention to further its own economic interests, which usually involves decimating a weaker nation. Read Naomi Klein’s “Shock Doctrine” and Stephen Kinzer’s “All the Shah’s Men” for just a few examples of this U.S. tactic as it has been implemented in various countries throughout the Middle East and South America since the inception of the CIA.

However, the Charles Koch Institute advocates for what it calls a “Goldilocks Zone”— military intervention that exercises some “restraint.” This restraint is presumably meant to deviate from our long and storied career of pissing off the entire world. Perhaps Charles Koch wants to dial it back JUST enough so that, for example, China doesn’t feel compelled to impose boycotts, embargoes, tariffs or other measures of economic punishment for our bad behavior (which would impact his bottom line).

The terms of the grant agreement spell out the chokehold the Charles Koch Foundation has on the TAMU campus and the influence it exerts over operations and research. Here is the actual grant agreement complete with TAMU President Michael K. Young’s signature.

The Foundation does not bestow grants in total up front. Rather, it withholds the funds and pays in installments following periodic checkups with the Center. This gives Koch the opportunity to make sure the Center is fulfilling its mission (of pushing his agenda). Within the grant agreement, the Foundation threatens to revoke all funding at any time if it determines that the Center isn’t doing exactly what Koch wants it to do.

People like Charles Koch do not give millions of dollars unless there is something in it for them, and that “something” is usually related to free enterprise and unfettered capitalism. The Charles Koch Foundation has also donated over $3 million to TAMU to support its Private Enterprise Research Center (PERC). According to TAMU’s website, “PERC’s mission is to provide Texas A&M, the state of Texas and the nation with analysis of important policy issues. The center provides a broad range of academic support for scholars at Texas A&M and market-oriented solutions to public policy problems” (emphasis added).

Representatives from the Koch Empire have even been known to interfere with campus hiring & firing practices at other college campuses (though we do not have proof that they have done so at TAMU since the Center was formed in October 2018).

All of this meddling, in the context of the inherently coercive relationship between a university and its top donor, is a grave threat to academic independence and integrity.

Research faculty should be able to follow research wherever it leads rather than pursuing an angle prescribed to them by a donor who is keeping the lights on.

Kochs on Campus is Like Ketchup on Fries
A&M is a convenient example of undue influence from the Kochs, but again, Koch influence toward reckless and corrupt policies and cultural influence on college campuses—particularly in Texas—is in full swing:

These schools often defend their decision to take Koch cash by claiming there is a strict wall between funding and academics. They may even point to the self-selection process of students to defend the decision to offer such programs in the first place.

Yet the issue with cash in academics has less to do with whether or not the money changes the outcome of the study than with the self-selection process the money creates. Faculty who brings home a big fish like a Koch will have more room to promote their research perspective; congruently, the Koch Empire finds champions for their money who they can depend on to discreetly spend it on an approach to economics that supports their off-the-rails corporatist free-for-all.

As for the students of these programs, those who are sympathetic already to the Koch worldview will receive extra support and resources inherently thanks to the money injected into their department forever from the Koch Foundation. In turn, they will be further indoctrinated by the Koch-friendly faculty members who think like Charles Koch, thus following in their footsteps and continuing to feed the Koch Machine.

Charles Koch is a threat to every campus his foundation has wrapped its tentacles around. Thankfully, an activist group called UnKoch My Campus provides resources and support to faculty and students across the country wishing to fight undue donor influence on their campus.

Do you work on a college campus? Check this list to see if your campus is being steered by donor influence from the Koch empire. Spoiler alert: University of Houston is on the list.

Faculty senates at several universities have passed policies to limit the influence of the Koch brothers on their campus. If you are on the faculty senate at any campus, here is a handbook with some model policies you can adapt easily for your purposes in order to limit donor influence on your campus. (Daniel J. Cohen contributed to this piece).