Three Republican Senators voted against the GOP’s Skinny Repeal Bill, Lisa Murkowski, Susan Collins, and John McCain ultimately killing Obamacare’s repeal. These Republicans are heroes. They bucked the evil that their party was about to impose on many Americans. They likely saved the lives of hundreds of thousands of Americans. They did the moral thing. 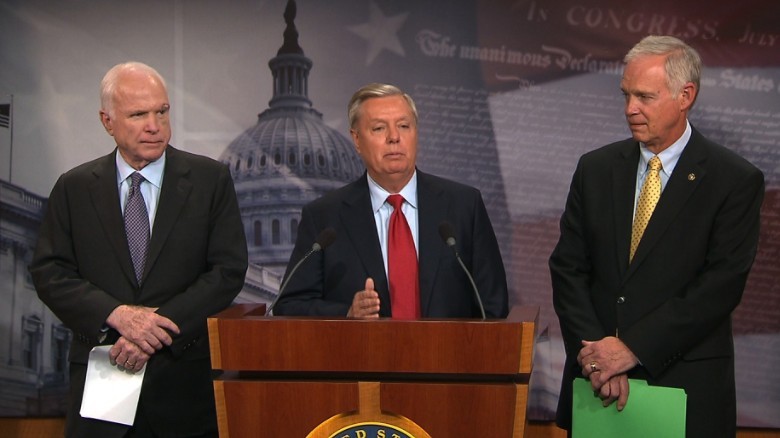 The vote was held up for some time as the vice president attempted to convince John McCain to vote in the affirmative. He was not successful. President Trump was unsuccessful in his threat to Alaska Senator Lisa Murkowski. She stood firm.

Obamacare is now more popular than not. Trumpcare is only supported by 17% of the population. It would have been a dereliction of duty to pass the bill.

Republican Senate Majority Leader said it is time to move on.Democratic Senate Minority Leader called for bipartisanship to improve the Obamacare. Senator Ted Cruz said that when Senators hear from their constituents, they will be bound to return and attempt to pass Trumpcare again.

In fact, soon after the vote, Donald Trump further revealed his evil character as he tweeted about letting Obamacare implode. He has little concern for the American people.

3 Republicans and 48 Democrats let the American people down. As I said from the beginning, let ObamaCare implode, then deal. Watch!

Here are the comments from various politicians.

Thousands and thousands of California calls and emails led the way to defeating this TERRIBLE bill. THANK YOU!

Tonight, we celebrate. Tomorrow, we get back to work to improve the Affordable Care Act for all Americans.

My full statement on the failure of Senate Republican health care bill: https://t.co/6wtQgbXqbH

The American people have spoken loud & clear. It's time to move beyond #Trumpcare & work to improve the ACA in a bipartisan manner. pic.twitter.com/gP2KN8IPg0

Thank you to everyone across the country who stood up and fought back. Tonight was a victory for the American people.

This is only the first step. We must now move forward to guarantee health care to all people as a right not a privilege.

We are not celebrating; we are relieved–for the Americans who can now keep their #healthcare. We must work together to improve the law.

The nightmare is over, at least for now.

The grassroots rose up. They were successful this time in giving Democrats the spine to stand firm and forced a few Republicans to bolt their party on this vote. The grassroots must, however, keep up the pressure on all their politicians. It is not the time to rejoice. There are many more progressive policies to defend. There is an election in 2018 to prepare for now. We must work towards passing a Single-Payer Medicare for All health care system.

Until Right Wing ideologues intent on dismantling America’s social safety net are removed from office, the resistance must persist.

This article originally posted at EgbertoWillies.com.