“19 Dead Kids… What About Background Checks?” 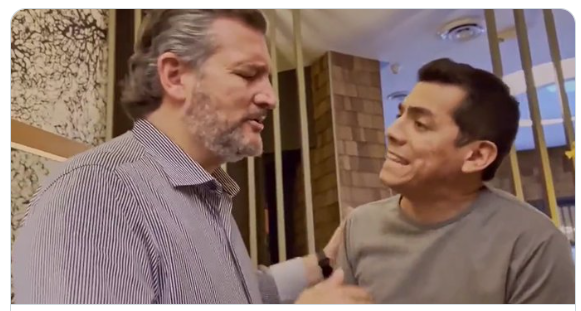 Houston, TX — Friday, May 27, 2022. Indivisible Houston Board Member Benjamin Hernandez challenged Ted Cruz to support background checks and other measures during a break in dinner at Uptown Sushi on Westheimer. See the whole clip here.

The exchange took place after thousands of people and dozens of groups rallied in Downtown Houston to support gun reform measures such as background checks, red flag laws for domestic abusers, limits on high-powered weapons and extended clips, and raising the age to purchase a firearm.

“He needs to be held accountable,” said Hernandez. “For him to attend the NRA Convention today after the murder of 19 kids and two teachers in Uvalde three days ago, and the murder of ten people just for being Black ten days ago in Buffalo, and to keep blocking gun reform measures, is embarrassing and tragic. It has been long been time for basic, common sense gun reform measures in this country. This can’t keep happening. Shame on Ted Cruz.”

Today’s rally for gun reform greatly outnumbered attendance at the convention. Several politicians and musicians backed out of the convention. Polling following the massacre in Uvalde shows a significant jump in support for further gun regulations.

Indivisible Houston is a pro-democracy organization dedicated to holding politicians and their corporate funders accountable for their actions. Founded in 2017, the organization has applied political pressure on a wide variety of issues at all levels of government, including gun reform, healthcare, immigration, counteractions to white supremacy, and transparency in government.