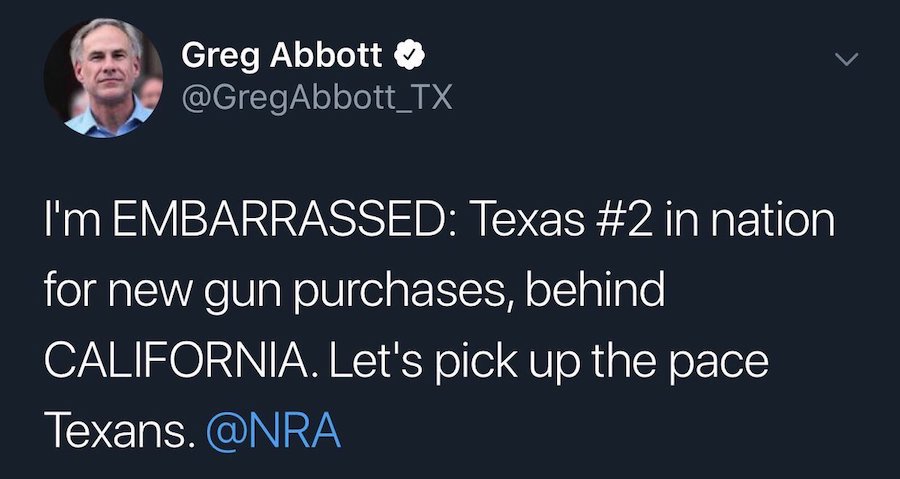 This week was the first meeting of the Texas Safety Commission, a handpicked committee of various lawmakers, officials, and leaders formed to address Texas gun violence in response to the El Paso shooting. The committee approach to gun violence is having a moment; it was recently echoed by U.S. Representative Dan Crenshaw when pressed by local activists, and we saw the same thing last year in the roundtables that took place after the Santa Fe shooting. Fortunately, we have a year’s worth of perspective on what happened last time, and we can predict how this will go.

A grab bag of opinions from different perspectives will be aired for the sake of fairness, but they will ultimately cancel each other out. Even the most moderate and popular proposals, such as gun storage regulations, will eventually be shut down by “Freedom Caucus” lawmakers such as Jonathan Strickland. Even lawmakers who are more moderately positioned on the gun issue will acquiesce to zealots in the interest of coming together to ruffle the fewest feathers. As an example, state senator Joan Huffman was a primary sponsor for a bipartisan gun storage bill this past legislative session, but the bill was never brought to a hearing in the committee it was assigned to, which Huffman herself chairs. Consensus in this environment means averaging out the sellouts, the cowards, and the insufficient ranks of gun safety advocates into something meaningless.

Finally, the outcome will be far too narrow. Because the Santa Fe shooting took place in a school, the roundtable recommended fixes that were myopically focused on the school environment, in a country where shootings are happening in every public space imaginable as well as the home, where gun violence is actually most common. Because the El Paso shooting took place at a Walmart, are the answers going to involve changes in grocery aisle design? Are we going to enact new forms of security theater for every type of public gathering place in turn?

The function of this exercise is not to protect Texans’ lives. It claims an ignorance for which the remedy is not information, but spitballing, as though no one has ever studied the problem before. The function of this exercise is to give the appearance of community and expert buy-in to legislative actions that sidestep both the will of the community and the evidence.

Far from being hopelessly polarized, strong majorities of Texans support specific gun safety measures including universal background checks, restrictions on high-capacity magazines, and red-flag laws. Yet, Texas lawmakers squeaked through a single step in the right direction last session, a gun storage safety campaign that the NRA happened to be ambivalent on, and gun restrictions were actually loosened in several ways. The evidence is clear that our gun problem is unique to our gun-flooded country. Yet, our leaders remain reluctant to do anything that has anything to do with guns.

It’s a trick for political survival.

Don’t fall for it.

Don’t let them ride out the call to responsibility. Demand something real. Ruffle every one of the feathers. Call their offices. Set meetings. Protest them. Keep on their tails.

And if you have to, mobilize up and down the ballot to get them out of office.