Amidst news that California did away with cash bail, there is a similar battle embroiling Houston’s criminal justice system. It can be distilled down to one question:

If your experience is drastically different depending on your race or class, how can our justice system be just?

It’s no secret that exorbitant cash bail creates modern-day debtors’ prisons. In Harris County, the bail set for a Class A misdemeanor can be as high as $4,000. Those who are unable to produce the bail amount must remain in jail up to one year. Considering the fact that most Americans don’t even have $500 in savings at any given time, even a $1,000 bail is an emergency expense that most can’t afford. Poor defendants are forced to either take the prison time or rely on predatory bail bonds lenders.

In 2016, the Texas Fair Defense Project and Civil Rights Corps sued Harris County on behalf of poor defendants arrested on misdemeanors who couldn’t afford bail. Since then, the county has spent approximately $7 million in legal fees defending itself.

In February of 2018, Federal Judge Lee Rosenthal issued new rules prohibiting the county from detaining a poor person if, in the same circumstances, a rich person could post bail and be released. Rosenthal ruled that the county’s bail practices violated due process and equal protection under the law. She ordered that people arrested for misdemeanor charges be released automatically to await trial if they state that they cannot afford the bail amount. 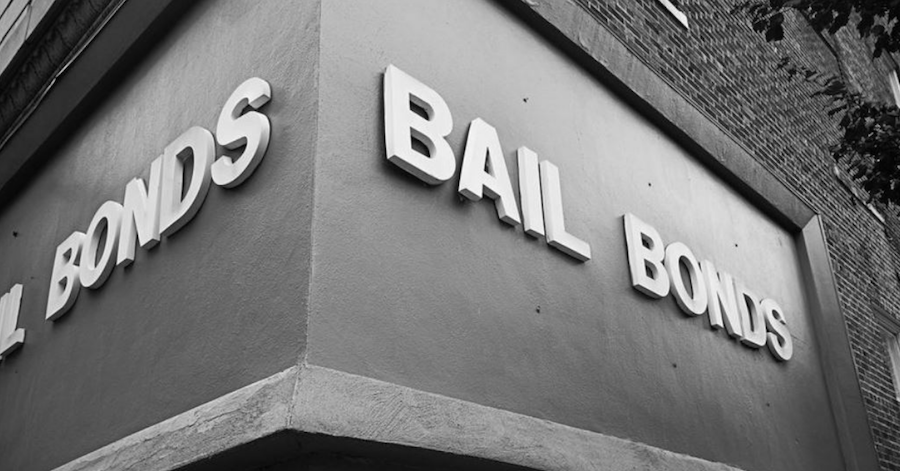 In August, 14 Harris County judges requested that, while the lawsuit moves through the justice system, judges and hearing officers be allowed to continue setting bail amounts. Their request was granted by the U.S. Court of Appeals for the Fifth Circuit (with Trump appointee Judge Stuart Kyle Duncan forming part of the 2-1 majority with Reagan appointee Jerry Edwin Smith). The opinion also paused implementation of Rosenthal’s ruling regarding automatic release for those who can’t afford the bail amount. Now, judges and hearing officers have 48 hours after the arrest to decide on the bail amount; meanwhile, the defendant waits in jail.

In a dissenting opinion, Circuit Judge James E. Graves Jr. criticized the majority decision of his panel, saying that “an individualized hearing 48 hours after arrest cannot ‘fix’ the deprivation of liberty and equal protection suffered by an indigent misdemeanor arrestee who is automatically detained prior to that hearing ‘solely because [he or she is] too poor to pay.”

A Tale of Two Justice Systems

Exorbitant bail amounts mean that experiences vary widely depending on whether the defendant is rich or poor. Rich defendants can quickly post bail and go on to live life relatively uninterrupted. Poor defendants choose which way they prefer to ruin their life: time served or massive debt.

“That time spent behind bars can cause significant harm to defendants who may lose their jobs or be unable to care for their families simply because they cannot afford bail,” Pct. 1 Commissioner Rodney Ellis released in a statement. Ellis denounced Harris county’s “two-tiered justice system that allows wealthy defendants to walk free after paying bail and keeps poor people stuck behind bars.”

Debora Ann Lyons had struggled with schizophrenia and bipolar disorder for years when HPD arrested her in July for stealing clothes and an air mattress. Lyons was being detained in Harris County’s Baker Street jail while awaiting trial because she couldn’t afford to pay her $1,500 bail. Out of desperation, Lyons decided to take her own life. She fashioned a bedsheet into a makeshift noose, attached it to a door in a common area, and hung herself. Unbeknownst to Lyons, authorities had finally decided to grant her a Personal Release. But justice was too late.

Deborah’s daughter Nina survives her. “If they would’ve told my momma she was getting out Wednesday, I don’t think my momma would’ve killed herself.”

Jay Jenkins, an attorney with the Texas Criminal Justice Coalition, criticized the system for pre-trial detainments that occur simply because the defendant is too poor. “The fact that this is happening is another indication that we need to rethink the wisdom of holding 10,000 people in our jail downtown, particularly those who are still legally innocent.”

Lest we forget, we are all innocent until proven guilty in a court of law. Pre-trial detainment seems to suggest assumed guilt, effectively criminalizing the poor for being poor in the absence of a criminal conviction. Put another way, we are violating the civil rights of legally innocent people. But innocence is beside the point. As Rashad Robinson, executive director of Color of Change points out, “you are better off being guilty and rich than innocent and poor in this country.”

Harris County DA Kim Ogg got elected on the promise of reforming Houston’s criminal justice system. This included overhauling or abolishing the cash bail system, which Ogg called “a tool to oppress the poor.” Many advocates for criminal justice reform applauded Ogg’s platform and voted for her in 2016 based partly on that promise. Three months after she assumed office, Ogg was quoted by the Guardian stating that “holding low-level offenders who can’t bond out because they’re too poor is against the basic principles of fairness.” Ogg also led the charge to decriminalize marijuana possession in Harris County.

Baffling her supporters, Ogg is now requesting that bail be set higher for minor offenses like marijuana possession and criminal trespass. In an email obtained by The Appeal, Ogg asked her prosecutors to request high bond amounts for misdemeanors, stating that “misdemeanor high bond requests should be $15,000.” In one case involving violation of a protective order, Ogg’s office requested that bail be set at $100,000.

How the Bail Bonds Industry Preys on the Poor

In response to a broken system, we’ve allowed a predatory industry to flourish. Bail bondsmen typically charge 10% on top of the bail amount, profiting off of and compounding the misery of the poorest among us.

Bail bonds saddle the poor with debt though criminal charges are likely to limit future career prospects and repayment ability. This creates a vicious cycle of poverty that only deepens and becomes more insuperable with every interaction with the criminal justice system. With so few employers willing to give convicts a chance, desperation begets desperation, until the only “solution” in sight is to commit another crime. The cycle of recidivism continues.

In a report calling for the abolition of the multi-billion dollar bail bonds industry, the ACLU wrote that “large companies whose only goal is profit should not be the gatekeepers of pretrial detention and release. The for-profit bail system in the United States fuels mass incarceration and contributes to racial and economic inequalities.”

Our increasingly privatized criminal justice system has become further privatized through its relationship with the bail insurance companies that underwrite the bonds. Since the 1990s, the American Bail Coalition has lobbied for money bail to play a larger role in the criminal justice system. Before ABC began lobbying, 23% of pretrial releases involved for-profit bail while 40% of suspects were released on their own recognizance. Today, it’s inverted—23% of suspects are released on their own recognizance and 49% must pay money bail for release.

Money bail’s increasing prevalence in the criminal justice system naturally increases profits for the bail bonds industry, incentivizing mass incarceration as a lucrative business model. With so much money on the line, perhaps it’s easy to forget that it’s human lives you’re playing with.

The bail bonds industry in the Houston area enjoys not only the institutional power provided by the law but also the institutional power of elected councilmember Michael Kubosh. Kubosh—an at-large Houston City Council rep—runs a lucrative bail bonds business alongside his public duties. In the past, Kubosh has written editorials defending an overly aggressive approach to cash bonds to further support the predatory industry.

How You Can Fight the Unjust Bail System

To help fight for a better bail system, take the following actions:

1) Call Harris County District Attorney Kim Ogg’s office. Tell her to KEEP HER CAMPAIGN PROMISE of no high bonds for misdemeanors. The DA should never hide behind “public safety” as an excuse for asking for high bonds on low crimes.

2) Contact Houston City Council At-Large 3 Councilmember Michael Kubosh. Demand he divest from the bail bond business entirely. No public official in Harris County- whether it’s Houston City Council or any other position of power- should be profiting off the bail system.
Phone: 832.393.3005
FAX; 832.393.3251
E-Mail: atlarge3@houstontx.gov

3) Contact County Judge Ed Emmett and your Harris County Commissioner to demand they follow the lead of Commissioner Ellis. If your commissioner is Rodney Ellis, thank his office and tell them to keep fighting on the issue.

4) Contact Harris County Attorney Vince Ryan. Tell him reframing rights to exclude those in prison prior to trial and is based on poor policy and bad decision making.